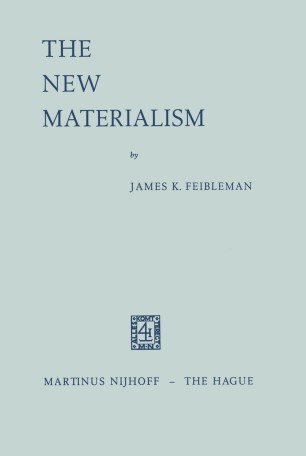 A wholly new theory of matter has been advanced in the last half century by modern physics, but there has been no new theory of ma­ terialism to match it. The occurrence of a revolution of such magni­ tude in science will have to be understood as calling for a corresponding one in philosophy. The present work is an attempt to make a start in that direction. Grateful acknowledgment is hereby made to the Editors of the fol­ lowing journals for permission to reprint articles which first appeared in their pages: to Darshana for "Human Nature and Institutions"; to Diogenes for "Full Concreteness and the Re-Materialization of Matter"; to Perspectives in Biology and Medicine for "The Ambiva­ lence of Aggression and the Moralization of Man"; to Philosophy and Phenomenological Research for "Formal Materialism Reconfirmed" (which appears here revised and extended as "Formal Materialism: The New Version"), and for "Artifactualism: The Origin of Man and His Tools"; to Philosophy Today for "How Abstract Objects Survive"; to Religious Studies for "A Religion for the New Materialism"; and to Tulane Studies in PhilosoPhy for "A Material Theory of Reference. " PART ONE INTRODUCTION AND METHOD CHAPTER I THE SUBJECTIVE DIGRESSION Every philosophy endeavors to be as comprehensive as possible, and when philosophers speak they do so for the whole world.