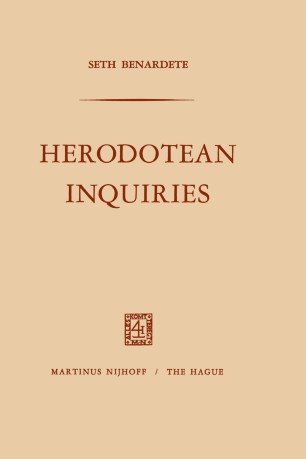 Herodotus has so often been called, since ancient times, the father of history that this title has blinded us to the question: Was the father of history an historian? Everyone knows that the Greek word from which 'history' is derived always means inquiry in Herodotus. His so-called Histories are in­ quiries, and by that name I have preferred to call them. His inquiries partly result in the presentation of events that are now called 'historical'; but other parts of his inquiry would now belong to the province of the anthro­ pologist or geographer. Herodotus does not recognize these fields as distinct; they all belong equally to the subject of his inquiry, but it is not self-evident what he understands to be his subject: the notorious difficulties in the proemium are enough to indicate this. If his work presents us with so strange a mixture of different fields, we are entitled to ask: Did Herodotus under­ stand even its historical element as we understand it? Without any proof everyone, as far as I am aware, who has studied him has assumed this to be so.