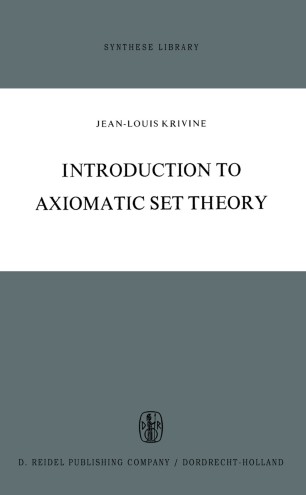 This book presents the classic relative consistency proofs in set theory that are obtained by the device of 'inner models'. Three examples of such models are investigated in Chapters VI, VII, and VIII; the most important of these, the class of constructible sets, leads to G6del's result that the axiom of choice and the continuum hypothesis are consistent with the rest of set theory [1]I. The text thus constitutes an introduction to the results of P. Cohen concerning the independence of these axioms [2], and to many other relative consistency proofs obtained later by Cohen's methods. Chapters I and II introduce the axioms of set theory, and develop such parts of the theory as are indispensable for every relative consistency proof; the method of recursive definition on the ordinals being an import­ ant case in point. Although, more or less deliberately, no proofs have been omitted, the development here will be found to require of the reader a certain facility in naive set theory and in the axiomatic method, such e as should be achieved, for example, in first year graduate work (2 cycle de mathernatiques).