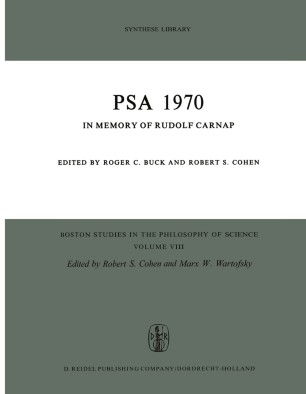 Part of the Boston Studies in the Philosophy of Science book series (BSPS, volume 8)

This book contains the papers presented at the second biennial meeting of the Philosophy of Science Association, held in Boston in Fall, 1970. We have added the paper by Jaakko Hintikka which he was unable to present due to illness, and we have unfortunately not received the paper of Michael Scriven. Otherwise, these proceedings are complete so far as formal presentations. The meeting itself was dedicated to the memory of Rudolf Carnap. This great man and distinguished philosopher had died shortly before. The five talks from the session devoted to recollections of Professor Carnap are printed at the beginning of this book, and they are followed by eight other tributes and memories. We are particularly grateful to Wolfgang Stegmiiller for permitting us to include a translation of his eloge which was broadcast in Germany. The photographs were kindly contributed by Hannah Thost-Carnap. ROGER C. BUCK Department of History and Philosophy of Science, Indiana University ROBER T S. COHEN Boston Center for the Philosophy of Science, Boston University Photograph by Francis Schmidt, 1935 Photograph by Adya, 1962 TABLE OF CONTENTS PREFACE v HOMAGE TO RUDOLF CARNAP XI Herbert Feigl, Carl G. Hempel, Richard C. Jeffrey, W. V. Quine, A. Shimony, Yehoshua Bar-Hillel, Herbert G. Bohnert, Robert S. Cohen, Charles Hartshorne, David Kaplan, Charles Morris, Maria Reichenbach, Wolfgang Stegmiiller SYMPOSIUM: THEORETICAL ENTITIES IN STATISTICAL EXPLANATION JAMES G. GREENO / Theoretical Entities in Statistical Explanation 3 WESLEY C. SALMON / Explanation and Relevance: Comments on James G.