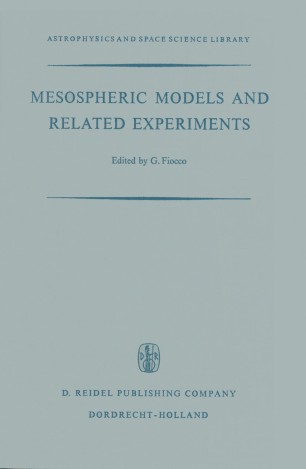 In July 1967 ESRIN and ESLAB, the two ESRO laboratories primarily concerned with basic research, held a joint symposium on Satellite and Rocket Measurements of Corpuscular Radiation from Outer Space. This was followed in September 1968 by a second symposium: Low-Frequency Waves and Irregularities in the Ionosphere; and in September 1969 by a third: Intercorrelated Satellite Observations Related to Solar Events. A fourth symposium, on upper atmospheric models and related experiments, took place in Frascati, 6-10 July 1970. The main aim of the symposium was to ~ssess current experimental work - both field and laboratory - related to mesospheric struc­ ture and composition, in the light of theoretical work on atmospheric models and atomic and molecular processes. To foster an interdisciplinary approach, the meeting brought together approximately 50 scientists working with different techniques but having a common interest in the interpretation of meso spheric phenomena. Recent work such as that presented at the symposium has deepened our knowledge of upper atmospheric composition, and increased our understanding of upper atmo­ spheric temperature and dynamics. In particular, it has shown that the concentration of minor species in the atmosphere is somewhat different than expected. Theoretical models have not yet considered many of the minor constituents and have generally not included dynamical effects. It is now time to reconsider these models and elaborate them in the light of recent knowledge.