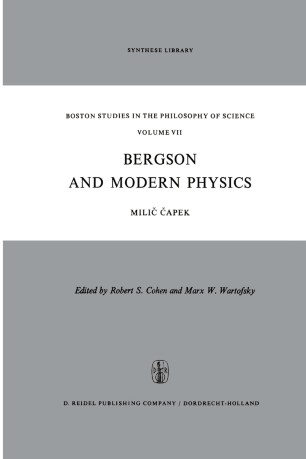 A Reinterpretation and Re-evaluation

Part of the Boston Studies in the Philosophy of Science book series (BSPS, volume 7)

Milic Capek has devoted his scholarship to the history and philosophy of modern physics. With impeccable care, he has mastered the epistemologi­ cal and scientific developments by working through the papers, treatises, correspondence of physicists since Kant, and likewise he has put his learning and critical skill into the related philosophical literature. Coming from his original scientific career with a philosophy doctorate from the Charles University in Prague, Capek has ranged beyond a narrowly defined philosophy of physics into general epistemology of the natural sciences and to the full historical evolution of these matters. He has ex­ pounded his views on these matters in a number of articles and, systema­ tically, in his book The Philosophical Impact of Contemporary PhYSiCS, published in 1961 and reprinted with two new appendices in 1969. His particular gift for many of his readers and students lies in the great period from the mid-nineteenth century through the foundations of the physics and philosophy of the twentieth, and within this spectacular time, Profes­ sor Capek has become a principal expositor and sympathetic critic of the philosophy of Henri Bergson. He joins a distinguished group of scholars -physicists and philosophers -who have been stimulated to some of their most profound and imaginative thought by Bergson's metaphysical and psychological work: Cassirer, Meyerson, de Broglie, Metz, Jankelevitch, Zawirski, and in recent years, Costa de Beauregard, Watanabe, Blanche, and others.