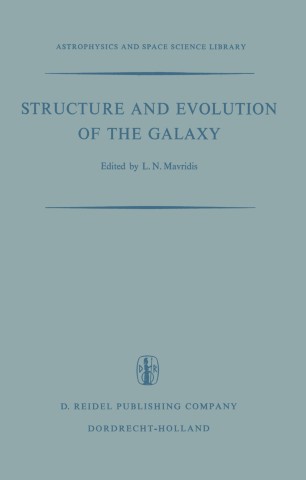 Structure and Evolution of the Galaxy

The present volume contains papers presented during the Advanced Study Institute on the 'Structure and Evolution of the Galaxy' held under the auspices of the Science Committee, North Atlantic Treaty Organization (NATO) in Lagonissi near Athens, Greece between 8-19 September 1969. Seventeen astronomers from eight countries acted as lecturers in the Institute, which was attended by sixty-three students from twelve countries. All the lectures given in the Institute were included in the volume with the exception of two lectures given by Professor P. van de Kamp on 'Stellar Parallaxes' and 'Objects of Very Low Mass', the manuscripts of which were not submitted in time in order to be considered for publication. It is obviously impossible in a two-weeks course to cover the vast field of the Struc­ ture and Evolution of the Galaxy in all its aspects. Effort has been made, however, to give the students a general outline of the field. In addition to the lectures ample time was spent in discussions and personal contacts. In order to simplify the publica­ tion it was felt reasonable, however, not to include the discussions in the present volume.