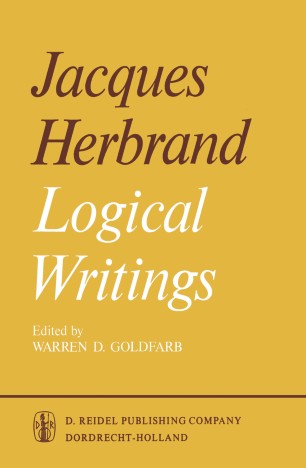 In 1968 Jean van Heijenoort published an edition of Herbrand's collected logic papers (Herbrand 1968). The core of the present volume comprises translations of these papers and of the biographical notes also appearing in that edition. With two exceptions, this is their first appearance in English; the exceptions are Chap. 5 of Herbrand's thesis and Herbrand 1931c, both of which appeared in van Heijenoort 1967, the former trans­ lated by Burton Dreben and van Heijenoort, and the latter by van Heijenoort. These two translations have been reprinted here, thanks to the permission ofthe Harvard University Press, with only minor changes. The remainder of the present translations are my own; I am grateful to van Heijenoort for providing an English draft of 1931, which forms the basis of the translation appearing here. In these translations, the bibliographical references have been stan­ dardized (see p. 299 below) and the notation has been changed so that it is fairly uniform throughout (any differences from Herbrand's original notation are mentioned in footnotes). Herbrand's technical terminology is not always translated literally; the principal instances of this are 'reduite', translated 'expansion' (except in 1930, Chap. 3, § 3, where it is translated 'relativization'), 'champ', translated 'domain', and 'symbole de variable apparente', translated 'quantifier'. In other cases of this sort, the French terms appear in double brackets immediately following the English renderings.