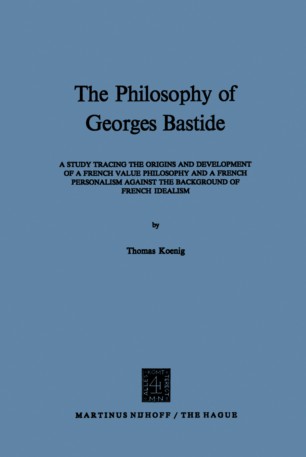 The Philosophy of Georges Bastide

The axiological idealism of Georges Bastide, which is itself an attempt to come to grips with basic philosophical problems in a form wholly in accord with the preoccupations of our times, offered a unique opportunity for coming into contact with two new horizons - critical idealism and axiological personalism. An examination of the intimate relationship between these two viewpoints promised to be of special interest and worthy of research. A similar theme is encountered in the philosophy of R. Le Senne and a number of works have been devoted to the study of his philosophy. However, in Bastide's axiological idealism the emphasis is on the relationship between the problem of spiritual conversion and the problem of the transfiguration of values and, as far as I know, no major study has been made of Bastide's philosophy. This study also opened up the possibility of a deeper understanding of the philosophies of Descartes and Kant, as well as the philosophies of Brunsch­ vicg and Bergson. Bastide's philosophy offers new possibilities for reflection on the past in the light of contemporary problems, just as his own work can be understood only in the light of the philosophies which are the chief inspi­ ration for his axiological idealism. In this regard we have devoted three chapters of historical background in order to introduce the main influences on Bastide's philosophy.