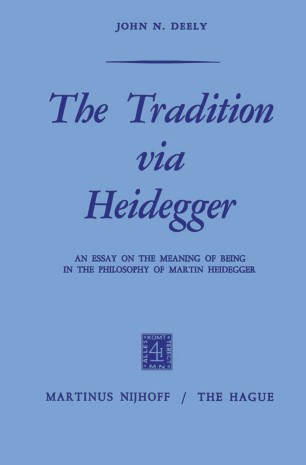 The Tradition via Heidegger

This book is not addressed to beginning students in philosophy so much as it is addressed to those who, though fairly well-versed in the philosophical tradition, find themselves frankly baffled and brought up short by the writ­ ings of Martin Heidegger, and who-while recognizing the novelty of the Heideggerean enterprise - may sometimes find themselves wondering if this "thinking of Being" is after all rich enough to deserve still further effort on their part. That at least was my own state of mind after a couple of years spent in studying Heidegger. Then one day, in preparing for a seminar, I suddenly saw, not indeed all of what Heidegger is about, but at least where he stands in terms of previous philosophers, and what is the ground of his thinking. After that, it became possible to assess certain strengths and weaknesses of his thought in terms of his own methodology vis-a-vis those earlier thinkers who, without having dreamed of anything quite like a Daseinsanalyse, had yet recognized in explicit terms the feature of experience on which the identi­ fication of Sein (and consequently the Daseinsanalyse) depends for its poss­ ibility.