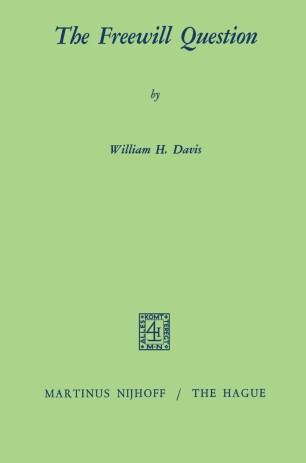 This book is the result of a discontent on my part with (r) the super­ ficial and offhand way many determinists set forth their arguments, without the slightest hint of the difficulties which have been raised against those arguments, and (2) the fact that the chief and best argu­ ments of the libertarians are scattered allover the literature and are seldom if ever brought together in one package. may be taken as an effort to gather into one place Mostly this work and to express as cogently as possible the arguments for freewill. So far as I know all of the arguments we treat have been made before. Only toward the end of this work do I attempt to elaborate a point not heretofore emphasized. That point is that freedom of the will is a concept intimately entangled with the human power to reason, so that if one of these powers goes, the other must also go. Moreover, both the will and the reason are intimately tied up with our moral sensitivities, so that no one of these phenomena is intelligible without the others. Hints of these ideas abound, of course, in the literature, and the degree of originality claimed is minimal. The interconnections, however, between these three basic concepts of the will, the reason, and the good, are of such great importance and are so usually ignored that I feel our short statement of the situation warrants the reader's sympathetic attention.