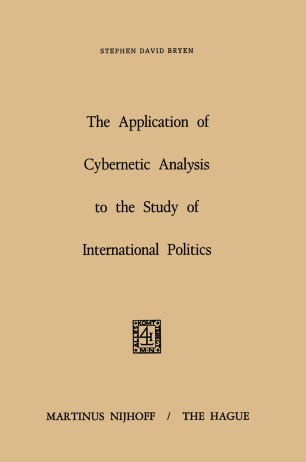 The Application of Cybernetic Analysis to the Study of International Politics

This study could not have been written before Professor Karl Deutsch made his great contribution to political science in his book, The Nerves of Govern­ ment. In applying the concepts elaborated in that work to the study of inter­ national politics it has been necessary to interpret and, occasionally, add to the concepts developed by Professor Deutsch. I do not know whether Deutsch would accept these changes, modifications and interpretations. Here I can only say that I have attempted to stay in the same spirit that I think motivated Professor Deutsch's pioneering study. That spirit is expressed throughout his work. It is that "all studies of politics, and all techniques and models suggested as instrument of political analysis, have this purpose: that men should be more able to act in politics with their eyes open. " In completing this work lowe much to many. Mrs. Susan Schellenberg aided me in identifying sections of an earlier draft that were unclear and helped me test some of the ideas I added to Deutsch's work. Mr. Frederick Slutsky did some preliminary testing of the action system formulations em­ ployed in the third chapter by using quantitative methods. Particular gratitude is due to the committee who saw this manuscript as a dissertation at Tulane University. This committee, led by Professor Henry L. Mason, consisted of Professor Warren Roberts, Jr. ; Professor James D. Cochrane; Professor Jean M. Danielson and Professor John. S. Gillespie.