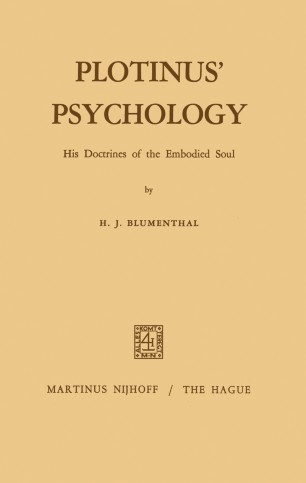 His Doctrines of the Embodied Soul

This book is a revised version, with some omissions, of a Cambridge doctoral dissertation submitted in 1963: I fear that it still bears marks of its origins. The dissertation itself was the result of an earlier scheme to identify the sources of Plotinus' psychological doctrines. In the course of this work it soon became evident that it was not sufficient1y clear what these doctrines were. Students of Plotinus have tended to concentrate on the higher regions of his world, and there is still no satisfactory treatment of his doctrines of the embodied soul. It is the purpose of this book to provide a fairly extensive survey of these doctrines. It does not claim to be exhaustive. Nor does it claim to add a large body of new knowledge, since over so wide a field many points have been touched on by others, if only in passing. But I hope that it may remove some misconceptions, and bring the details of Plotinus' theories into sharper focus. It had been my intention to add an introduction - mainly for the benefit of non-specialist readers - on the psychology of Plotinus' predecessors. In the meantime the Cambridge History of Later Greek and Early Medieval Philosophy has appeared, and the reader who wants information on this subject may convenient1y be referred to the relevant parts of the late Professor Merlan's chapters on the predeces­ sors of Plotinus.