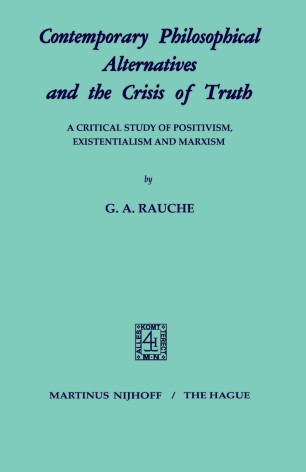 Contemporary Philosophical Alternatives and the Crisis of Truth

A Critical Study of Positivism, Existentialism and Marxism

The function of philosophy may be circumscribed as consisting in ma­ king a keen analysis of the peculiar nature of the crisis-situation, as it has existed among men throughout the centuries of human history, and as it manifested itself in definite ways at the various stages of this his­ tory. That is to say, philosophy may be regarded as the discipline which, again and again, will have to determine the authenticity of man's ex­ istence in the light of the changing conditions of life, i. e. , man's chang­ ing needs and interests. Fundamentally, these needs may be regarded as being of a material, an intellectual, an aesthetical and a spiritual kind. On the grounds of the crisis, which inevitably exists among men on ac­ count of the controversial nature of their various truth-perspectives, as they are postulated on a personal level, in the sciences, in history, in the fine arts and in theology, man creates and re-creates the goods of civilization and the cultural values. The task of philosophy consists then in making an ever new assessment of man's changing needs, in­ terests and aspirations on the basis of the specific conflicts and prob­ lems with which man wrestles at a certain historical stage. It is in this way that the important philosophical systems were constructed, which we still admire to-day.