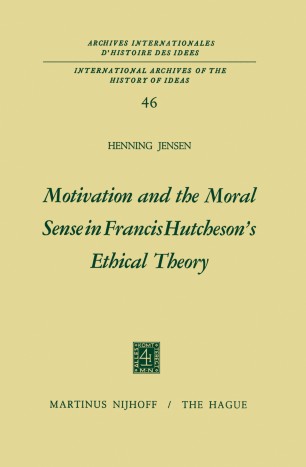 Motivation and the Moral Sense in Francis Hutcheson’s Ethical Theory

Although the works of Francis Hutcheson are unfamiliar to most students of philosophy, it cannot be said that he has been entirely ignored. To be sure, most of the recent writers who deal with Hutcheson's philosophy do so in the course of writing about Hutcheson's famous contemporary, David Hume. This is true, for example, of Norman Kemp Smith, whose book entitled The Philosophy of David Hume 1 includes much detailed information concerning Hume's indebtedness to Hutcheson. But others have written about Hutcheson on his own account. William R. Scott's Francis Hutcheson,2 although mainly biographical and historical, is well worth reading. In his article "Some Reflections on Moral-Sense Theories in Ethics," 3 C. D. Broad presents a sustained analysis of the sort of theory held by Hutcheson. D. Daiches Raphael's The Moral Sense 4 is competent, interesting, and especially valuable in its treatment of epistemological issues surrounding the moral sense theory. William K. Frankena's article entitled "Hutcheson's Moral Sense Theory" Ji is search­ ing and profound. And, most recent of all, a book by William T. Black­ stone has appeared entitled Francis Hutcheson and Contemporary Ethi­ cal Theory. 6 One of the difficulties encountered in presenting a study of Hutcheson is that all of his books are extremely rare. Fortunately, L. A. Selby-Bigge'l) 1 Nonnan Kemp Smith, The Philosophy of David Hume (London: Macmillan and Co. , Limited, 1949). Ii William Robert Scott, Francis Hutcheson (Cambridge, Eng. : Cambridge Uni­ venity Press, 1900).