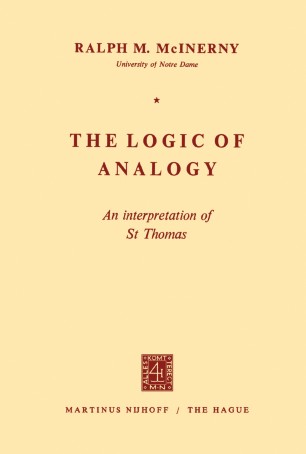 The Logic of Analogy

An Interpretation of St Thomas

The need for another study on the doctrine of analogy in the writings ofSt Thomas may not be obvious, since a complete bibliography in this area would doubtless assume depressing proportions. The present work is felt to be justified because it attempts a full-fledged alternative to the interpretation given in Cajetan's De nominum analogia, an interpretation which has provided the framework for subsequent discussions of the question. Recently, it is true, there has been growing dissatisfaction with Cajetan's approach; indeed there have been wholesale attacks on the great commentator who is alleged to have missed the clef de voute of the metaphysics of his master. Applied to our problem, this criticism leads to the view that Cajetan was not metaphysical enough, or that he was metaphysical in the wrong way, in his discussion of the analogy of names. As its title indicates, the present study is not in agreement with Cajetan's contention that the analogy of names is a metaphysical doctrine. It is precisely a logical doctrine in the sense that "logical" has for St Thomas. We have no desire to be associated with attacks on Cajetan, the meta­ physician, attacks we feel are quite wrongheaded. If Cajetan must be criticized for his interpretation of the analogy of names, it is imperative that he be criticized for the right reasons. Moreover, criticism ofCajetan in the present study is limited to his views on the analogy of names.