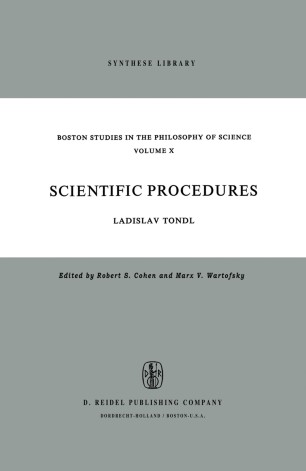 Part of the Boston Studies in the Philosophy of Science book series (BSPS, volume 10)

For a decade, we have admired the incisive and broadly informed works of Ladislav Tondl on the foundations of science. Now it is indeed a pleasure to include this book among the Boston Studies in the Philosophy of Science. We hope that it will help to deepen the collaborative scholar­ ship of scientists and philosophers in Czechoslovakia with the English­ reading scholars of the world. Professor Ladislav Tondl was born in 1924, and completed his higher education at the Charles University iIi Prague. His doctorate was granted by the Institute of Information Theory and Automation. He was a professor and scientific research worker at the Institute for the Theory and Methodology of Science, which was a component part of the Czechoslovak Academy of Sciences. Tondl's principal fields of interest are the methodology of the empirical and experimental sciences, logical semantics, and cybernetics. For many years, he collaborated with Professor Albert Perez and others at the Institute of Information Theory and Automation in Prague, and he has undertaken fruitful collaboration with logicians in the Soviet and Polish schools, and been influenced by the Finnish logicians as well, among them Jaakko Hintikka. We list below a selection of his main publications. Perhaps the most accessible in presenting his central conception of the relationship between modem information theory and the methodology of the sciences is his 1965 paper with Perez, 'On the Role of Information Theory in Certain Scientific Procedures'.