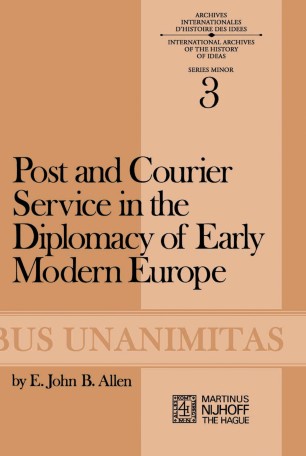 Post and Courier Service in the Diplomacy of Early Modern Europe

Diplomatic negotiation of our day is a curious mix of national endeavor within the bloc concept. The remnants of our nineteenth century nation­ alism struggles - half willingly - with the power that a larger continental or ideological bloc might bring. In the sixteenth century men knew that the protective bloc of Christendom would not provide peace, yet they were not sure that the new national states would secure it either. We have much to gain from a study of diplomatic procedures and institutions in such a transitional period. This monograph is based upon the great collections of published diplomatic correspondence of England, France, and Spain and, thanks to the generosity of Dr. De Lamar Jensen, I have been fortunate in having at my disposal his hoard of microfilmed letters and dispatches of the leading ambassadors of the sixteenth century. Of course, I have not read all the diplomatic correspondence, but I believe I have culled sufficient information to show and analyze the role played by the post and courier service in the diplomacy of Early Modem Europe.