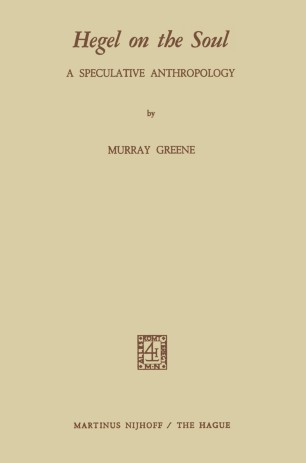 Hegel on the Soul

The present study seeks to treat in depth a relatively restricted portion of Hegel's thought but one that has not yet received intensive treatment by Hegel scholars in English. In the Hegelian system of philosophical sciences, the Anthropology directly follows the Philosophy of Nature and forms the first of the three sciences of Subjective Spirit: 1 Anthropo­ logy, Phenomenology, and Psychology. The section on Subjective Spirit is then followed by sections on Objective Spirit and Absolute Spirit. The three sections together comprise the Philosophy of Spirit (Philosophie des Geistes 2), which constitutes the third and concluding main division of Hegel's total system as presented in the Encyclopedia of Philosophic Sciences in Outline. a Hegel intended to write a separate full-scale work on the philosophy of Subjective Spirit as he had done on Objective Spirit (the Philosophy of Right), but died before he could do so. · Thus the focus of our study is quite concentrated. Its relatively narrow scope within the vast compass of the Hegelian system may be justified, 1 Iring Fetscher (HegeUt Lehre vom Menschen, Stuttgart, 1970, p. 11) notes the lack of a modem commentary to Hegel's Encyclopedia, and in particular to the section on Subjective Spirit. Brief accounts of this section in English may be found in: Hugh A. Reyburn, The Ethical Theory of Hegel (Oxford, 1921), Chapter V; and O. R. O. Mure, A Study of Hegers Logic (Oxford, 1950), pp. 2-22.