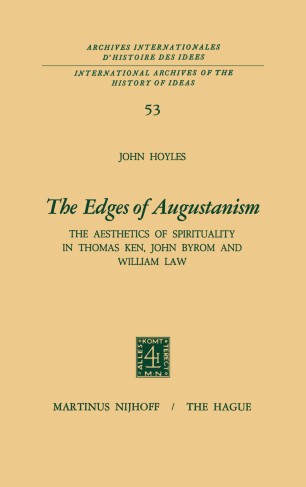 The Aesthetics of Spirituality in Thomas Ken, John Byrom and William Law

It has recently been argued that the 18th century can no longer be 1 seen as gripped in the strait-jacket of Augustanism and Neoclassicism. Such labels are seen as doing less than justice to the rich variety of individual talents and intellectual trends which collectively constitute 18th century culture. While welcoming the interment of the long­ standing myth of the peace of the Augustans, there seems little point in placing an interdict on labels which, willy-nilly, have stuck. In economic, social and ecclesiastical terms there is an age between 1689 and 1789 whose homogeneity is reflected in its cultural products. There is a mainstream which the strength and variety of counter­ currents and cross-currents corroborate rather than disintegrate. It is the purpose of this study to reveal some aspects of this mainstream by examining certain cross-currents which overlap its edges. Hence the choice of Thomas Ken (1637-1711), John Byrom (1692-1763) and William Law (1686-1761).