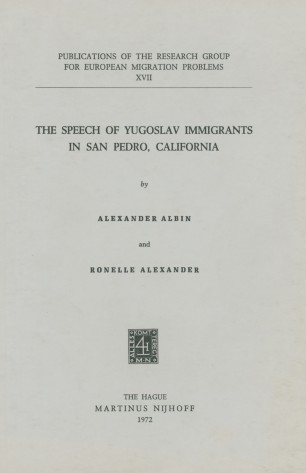 The Speech of Yugoslav Immigrants in San Pedro, California

Part of the Publications of the Resèarch Group for European Migration Problems book series (REMP, volume 17)

This study represents but the initial phase of a multidisciplinary endeavor sponsored by the Russian and East European Studies Center of the University of California, Los Angeles, the ultimate goal of which is to provide a comprehensive description and analysis of the cultural, linguistic, economic and social integration of the Slavs living in California into American society. As the first step of this planned cross-disciplinary investigation, the Center recommended the implementation of a preliminary study of a limited scope, the present linguistic investigation of the Yugoslav community of San Pedro, California. As there is a dearth of information of a sociological as well as a linguistic nature pertaining to the local Slavs, the investigators decided to treat briefly the sociological situation of Yugoslav immigrants and then proceed with a more detailed discussion of the linguistic problems of immigrant bilingualism. Consequently, we have divided the present study into the following major chapters : Chapter I, the Yugoslav Immigration to America, not only examines the several phases of Yugoslav immigration to the United States, but also discusses the various motives which prompted people to immigrate to this country and especially to the small maritime community of San Pedro; against this background the investigators describe the Yugoslav ethnic minority and its contributions to the San Pedro community.