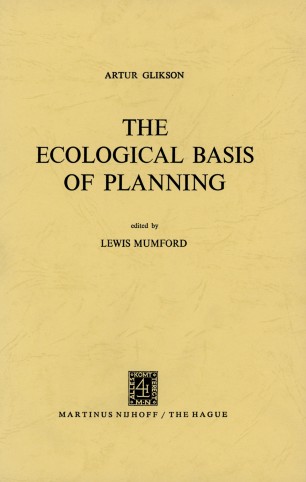 The Ecological Basis of Planning

When Artur Glikson died in July 1966 he was still comparatively unknown; yet paradoxically he had an international reputation that went beyond town planning and architectural circles. As far back as 1955, when he was forty­ four years old, he was an active participant in the notable Wenner-Gren Conference on "Man's Role in Changing the Face of the Earth," where he presented the first paper in the present book. Seven years later he was the only nonscientist represented in the even more selective Ciba Foundation conference on Man and his Future. Though Glikson attended many other important international conferences, notably the International Seminar on Regional Planning in The Hague in 1957, and the International conference of Landscape Architects in Amsterdam in 1960, he has yet to leave his mark on the thought and practice of architects and planners, his own professional group. The fact that Artur Glikson's activities as a pioneer in sociological plan­ ning are still relatively unknown, might seem a handicap from the point of this book's getting the public or professional attention that it deserves. But this is perhaps the best reason for bringing out the assembled papers and giving a picture of their background in his personal experience.