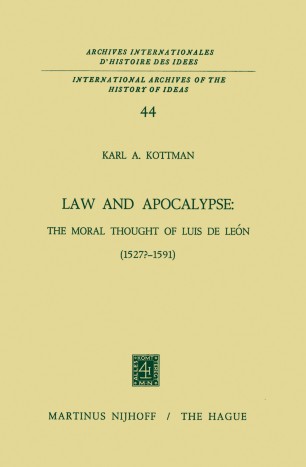 This book has two purposes. The first is clearly historical, the second is more philosophical and interpretive. Its success in the former will be less arguable than its attainment of the latter. The contribution to the history of Spanish letters consists in critically establishing the fact that the sources of Fray Luis de Le6n's moral and spiritual thought are Hebraic and that he can be seen to stand as one in a long line of Christian Hebraists, both scholastic and humanist. His philosophical views are cast in an Hebraic tradition, not in an Hellenic one as supposed by nearly every other commentator. I have stressed the presence of a living Hebrew culture in Spain after 1492, and I have suggested that this and the Jewish parentage of Fray Luis are very significant. I have also identified an intellectual debt Fray Luis owed to non-Jewish Orientalists such as Egidio da Viterbo and Girolamo Seripando. But, even they learned from exiled Spaniards. I want to present Fray Luis as a most characteristic thinker in the world of Baroque Spain. I think most will agree with the picture I have outlined. The more audacious aspect is my wish to show the importance of the Jewish heritage as found in the literary and philosophical production of this remarkable genius. It is, of course, my contention that today know­ ledge about Fray Luis and what he stood for is extraordinarily important.