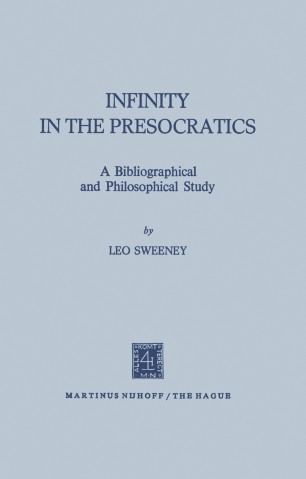 Infinity in the Presocratics

A Bibliographical and Philosophical Study

Throughout the long centuries of western metaphysics the problem of the infinite has kept surfacing in different but important ways. It had confronted Greek philosophical speculation from earliest times. It appeared in the definition of the divine attributed to Thales in Diogenes Laertius (I, 36) under the description "that which has neither beginning nor end. " It was presented on the scroll of Anaximander with enough precision to allow doxographers to transmit it in the technical terminology of the unlimited (apeiron) and the indeterminate (aoriston). The respective quanti­ tative and qualitative implications of these terms could hardly avoid causing trouble. The formation of the words, moreover, was clearly negative or privative in bearing. Yet in the philosophical framework the notion in its earliest use meant something highly positive, signifying fruitful content for the first principle of all the things that have positive status in the universe. These tensions could not help but make themselves felt through the course of later Greek thought. In one extreme the notion of the infinite was refined in a way that left it appropriated to the Aristotelian category of quantity. In Aristotle (Phys. III 6-8) it came to appear as essentially re­ quiring imperfection and lack. It meant the capacity for never-ending increase. It was always potential, never completely actualized.