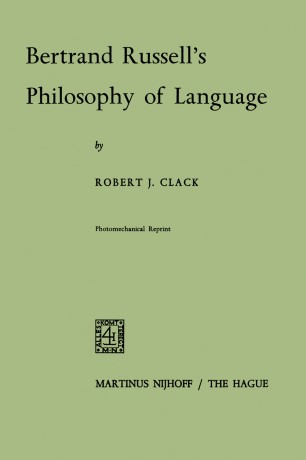 RUSSELL AND THE LINGUISTIC PHILOSOPHY It is generally acknowledged that Bertrand Russell played a vital role in the so-called "revolution" that has taken place in twentieth century Anglo-American philosophy, the revolution that has led many philo­ sophers virtually to equate philosophy with some variety - or varieties - of linguistic analysis. His contributions to this revolution were two­ fold: (I) together with G. E. Moore he led the successful revolt against the neo-Hegelianism of Idealists such as Bradley and McTaggert; (2) again with Moore he provided much of the impetus for a somewhat revolutionary way of doing philosophy. (I) and (2) are, of course, close­ ly related, since the new way of philosophizing could be said to consti­ tute, in large part, the revolt against Idealism. Be this as it may, how­ ever, the important fact for present consideration is that Russell was a major influence in turning Anglo-American philosophy in the direction it has subsequently taken - toward what may be termed, quite general­ ly, the "linguistic philosophy. " Unfortunately, though his importance as a precursor of the linguistic philosophy is well-known, the precise sense in which Russell himself can be considered a "philosopher of language" has not, to the present time, been sufficiently clarified. Useful beginnings have been made toward an investigation of this question, but they have been, withal, only begin­ nings, and nothing like an adequate picture of Russell's overall philoso­ phy of language is presently available.