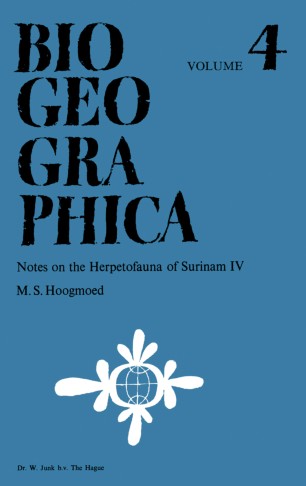 Notes on the Herpetofauna of Surinam IV

The lizards and amphisbaenians of Surinam

Although biological exploration in Surinam started about 300 years ago, a thorough account of the Surinam herpetofauna has not hitherto been publish­ ed. Several publications on the subject have been issued (see below), but none of them was comprehensive. However, there are several papers dealing with a part of the Surinam lizards. The main reason for the absence of a complete review of the Surinam lizards (and, for that matter, of the entire herpeto­ fauna) has been the scarcity of the material available in museum collection although some of the more common species reached museums in considerable numbers. Until about 1900 the interior of Surinam was virtually terra incognita and most collecting took place in a restricted, cultivated area along the coast and the farthest inland point reached was Berg en Dal on the Suriname River. From 1900 exploration of the interior was actively encouraged by the Dutch Government, and under the auspices of the Koninklijk Nederlandsch Aard­ rijkskundig Genootschap several geographical expeditions explored the main river systems. Although the main purpose of these expeditions was to map the visited areas, usually the physician accompanying the expedition was entrusted also with the collecting of zoological and botanical specimens. Interesting ma­ terial from the interior started to reach the Dutch museums in ever increasing numbers after the late nineteen thirties when Dr. D. C. GEIJSKES arrived in Su­ rinam. The Surinam Expedition 1948-49 in which Dr. GElJSKES and Mr. P. H.