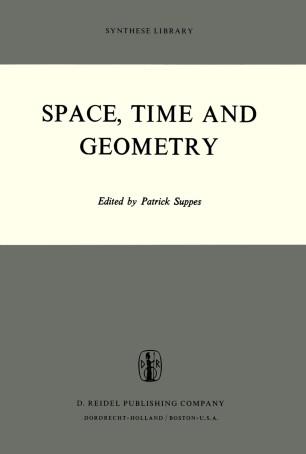 The articles in this volume have been stimulated in two different ways. More than two years ago the editor of Synthese, laakko Hintikka, an­ nounced a special issue devoted to space and time, and articles were solicited. Part of the reason for that announcement was also the second source of papers. Several years ago I gave a seminar on special relativity at Stanford, and the papers by Domotor, Harrison, Hudgin, Latzer and myself partially arose out of discussion in that seminar. All of the papers except those of Griinbaum, Fine, the second paper of Friedman, and the paper of Adams appeared in a special double issue of Synthese (24 (1972), Nos. 1-2). I am pleased to have been able to add the four additional papers mentioned in making the special issue a volume in the Synthese Library. Of these four additional articles, only the one by Fine has pre­ viously appeared in print (Synthese 22 (1971), 448-481); its relevance to the present volume is apparent. In preparing the papers for publication and in carrying out the various editonal chores of such a task, I am very much indebted to Mrs. Lillian O'Toole for her extensive assistance. INTRODUCTION The philosophy of space and time has been of permanent importance in philosophy, and most of the major historical figures in philosophy, such as Aristotle, Descartes and Kant, have had a good deal to say about the nature of space and time.