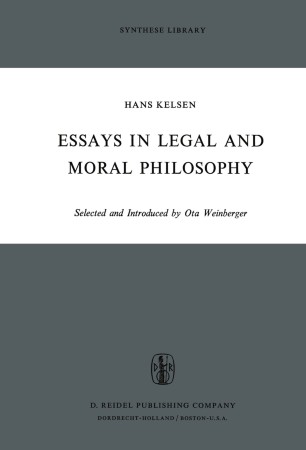 Essays in Legal and Moral Philosophy

In his choice of texts, the Editor has been faced with the difficult task of selecting, from among the author's more than 600 publications, those of the greatest philosophical interest. It is chiefly the topics of value-rela­ tivism and the logic of norms that have been kept in view. The selection has also been guided by the endeavour to reprint, so far as possible, texts which have not hitherto appeared in English. At times, however, this aim has had to be discarded, in order to include works of key im­ portance and also the latest expressions of Kelsen's view. In addition to the two topics already mentioned, the Editor has con­ sidered Kelsen's discussions of the causal principle to be so far worthy of philosophical attention, that some writings on causality and account­ ability have been included in this collection of philosophical studies. OTA WEINBERGER Hans Kelsen died on April 19th, 1973. Only his work now lives, for the inspiration of future generations of jurists and philosophers. Graz, 25th April, 1973 OT A WEINBERGER TRANSLATOR'S NOTE I am obliged to the Editor for his careful scrutiny of the translation, which has led to a number of corrections and improvements in the text.