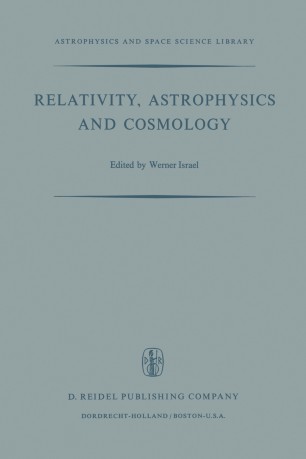 Proceedings of the Summer School Held, 14–26 August, 1972 at the Banff Centre, Banff, Alberta

The 1972 Banff lectures attempted a systematic exposition of the ideas underlying recent developments in general relativity and its astronomical applications at a level accessible and useful to graduate students having some previous acquaintance with the subject. To our regret, it was not possible to include any printed record of Peebles' beautiful lectures on observational cosmology or of the many stimulating seminars on special topics contributed by the participants. What remains is nevertheless a reason­ ably self-contained and compact introduction to Einstein's theory in its modern in­ carnation, and we hope it will be found useful by the many physicists, astronomers, and mathematicians who wish to update and deepen their understanding of the theory. On behalf of the organizing committee, I should like to express appreciation to a number of people whose help was crucial to the success of the enterprise: to Jan van Kranendonk, who initiated the idea of a Banff summer school on general relativity; to him and to David Rowe and Don Betts for inspiration and moral support; to our indefatigable secretaries Olwyn Buckland and Leslie Hughes; and to Garry Nash, Richard Sigal, Tim Spanos, and Gordon Wilson who helped in a variety of ways to keep the wheels running. How much we owe to the splendid cooperative effort of the lecturers will be clear to any reader of the following pages.