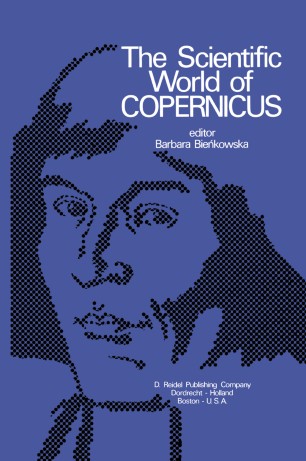 The Scientific World of Copernicus

On February 19, 1973, five centuries have elapsed since the birth of Nicolaus Coperni­ cus - the greatest astronomer of the Renaissance period - who rediscovered for us the heliocentric model of the solar system, and documented it by his life's work in such a manner as to make its concept a permanent property of mankind. The life of Copernicus, extending from 19 February 1473 to his death on 24 May 1543, was not too rich in adventures or biographical facts. Born in Toruti from a family of Polish burghers, he received his first university training in Cracow between 1491-1494. From Cracow he proceeded to Italy to spend the years between 1496-1503 at the Universities of Bologna, Padua and Ferrara - with occasional visits to Rom- in preparation for an ecclesiastical career. When Bishop Watzenrode - his patron and maternal uncle - could no longer extend his leave, Copernicus returned to Poland in 1503 to enter the service of the church establishment, which soon led to a canonry at the Frombork (Frauenburg) Cathedral in Warmia. And there - in the northern mists not far from the Baltic shores - in a land so different in climate from the sunny Italy of his youth - he was destined to spend the rest of his life.