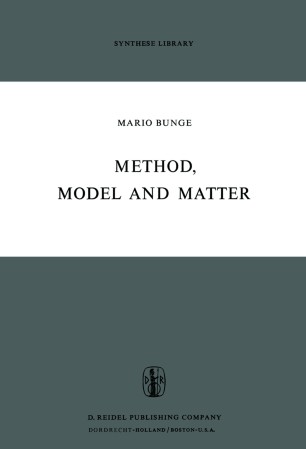 This collection of essays deals with three clusters of problems in the philo­ sophy of science: scientific method, conceptual models, and ontological underpinnings. The disjointedness of topics is more apparent than real, since the whole book is concerned with the scientific knowledge of fact. Now, the aim of factual knowledge is the conceptual grasping of being, and this understanding is provided by theories of whatever there may be. If the theories are testable and specific, such as a theory of a particular chemical reaction, then they are often called 'theoretical models' and clas­ sed as scientific. If the theories are extremely general, like a theory of syn­ thesis and dissociation without any reference to a particular kind of stuff, then they may be called 'metaphysical' - as well as 'scientific' if they are consonant with science. Between these two extremes there is a whole gamut of kinds of factual theories. Thus the entire spectrum should be dominated by the scientific method, quite irrespective of the subject matter. This is the leitmotiv of the present book. The introductory chapter, on method in the philosophy of science, tackles the question 'Why don't scientists listen to their philosophers?'.