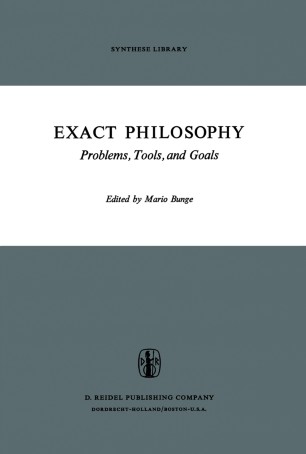 The papers that follow were read and discussed at the first Symposium on Exact Philosophy. This conference was held at Montreal on November 4th and 5th, 1971, to celebrate the sesquicentennial of McGill University and establish the Society for Exact Philosophy. The expression 'exact philosophy' is taken to signify mathematical phi­ losophy, i.e., philosophy done with the explicit help of mathematical logic and mathematics. So far the expression denotes an attitude rather than a fully blown discipline: it intends to convey the intention to try and pro­ ceed in as exact a manner as we can in formulating and discussing phi­ losophical problems and theories. The kind of philosophy we wish to practice and promote is disciplined rather than wild, systematic rather than disconnected, and capable of being argued over rather than oracular. We believe that even metaphysics, notoriously riotous, can be subjected to the control of logic and mathematics. Even the history of philosophy, notoriously unsystematic, can benefit from an exact reconstruction of some classical ideas.