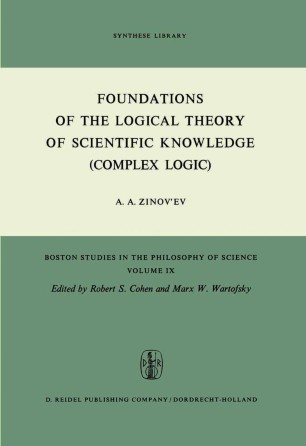 Foundations of the Logical Theory of Scientific Knowledge (Complex Logic)

Part of the Boston Studies in the Philosophy of Science book series (BSPS, volume 9)

Boston Studies in the Philosophy of Science are devoted to symposia, con­ gresses, colloquia, monographs and collected papers on the philosophical foundations of the sciences. It is now our pleasure to include A. A. Zi­ nov'ev's treatise on complex logic among these volumes. Zinov'ev is one of the most creative of modern Soviet logicians, and at the same time an innovative worker on the methodological foundations of science. More­ over, Zinov'ev, although still a developing scholar, has exerted a sub­ stantial and stimulating influence upon his colleagues and students in Moscow and within other philosophical and logical circles of the Soviet Union. Hence it may be helpful, in bringing this present work to an English-reading audience, to review briefly some contemporary Soviet investigations into scientific methodology. During the 1950's, a vigorous new research program in logic was under­ taken, and the initial published work -characteristic of most Soviet pub­ lications in the logic and methodology of the sciences - was a collection of essays, Logical Investigations (Moscow, 1959). Among the authors, in addition to Zinov'ev himself, were the philosophers A. Kol'man and P. V. Tavanec, and the mathematicians and linguists, S. A. Janovskaja, A. S. Esenin-Vol'pin, S. K. Saumjan, G. N. Povarov.