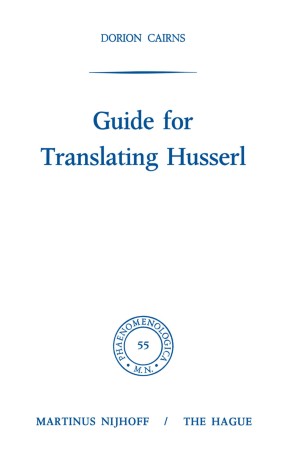 This multilingual glossary is a guide for translating writings by Edmund RusserI into English. It has been compiled and improved in the course of about thirty years for my own guidance. Its initial pur­ pose and the tests it has undergone in use have determined its contents. The translations I have made are far from being limited to those I have published or intend to publish. As I read and translate more, occasions will doubtless arise to include more expressions in the glossary and to improve the lists of English renderings I shall thenceforth use. The glossary is given the present title and submitted now for publication because numerous experts have said it would be useful not only to other translators of HusserI but also to his readers generally. For a translation of such writings as RusserI's the guidance offered by ordinary bilingual dictionaries is inadequate in opposite respects. On the one hand, there are easily translatable expressions for which numerous such dictionaries offer too many equivalent renderings. On the other hand, there are difficultly translatable expressions that any such dictionary either fails to translate at all or else translates by expressions none of which fit the sense. In following such dictionaries a translator must therefore practise consistency on the one hand and ingenuity on the other. Hence the need for a written glossary such as this one.