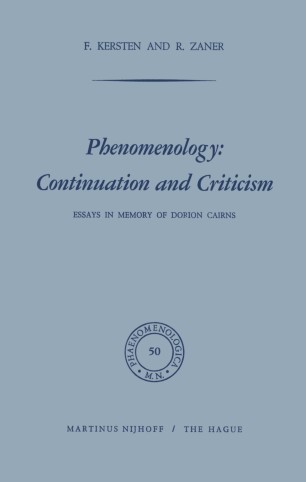 Essays in Memory of Dorion Cairns

Under the title of "Phenomenology: Continuation and Crit­ icism," the group of essays in this volume are presented in honor of Dorion Cairns on his 70th birthday. The contributors comprise friends, colleagues and former students of Dorion Cairns who, each in his own way, share the interest of Dorion Cairns in Husserlian phenomenology. That interest itself may be best defined by these words of Edmund Husserl: "Philosophy - wis­ dom (sagesse) - is the philosopher's quite personal affair. It must arise as his wisdom, as his self-acquired knowledge tending toward universality, a knowledge for which he can answer from the beginning . . . " 1 It is our belief that only in the light of these words can phenomenology and phenomenological philosophy be continued, but always reflexively, critically. For over forty years Dorion Cairns has, through his teaching and writing, selflessly worked to bring the idea expressed by Husserl's words into self­ conscious exercise. In so doing he has, to the benefit of those who share his interest, confirmed Husserl's judgement of him that he is "among the rare ones who have penetrated into the deepest sense of my phenomenology, . . . who had the energy and persist­ ence not to desist until he had arrived at real understanding.