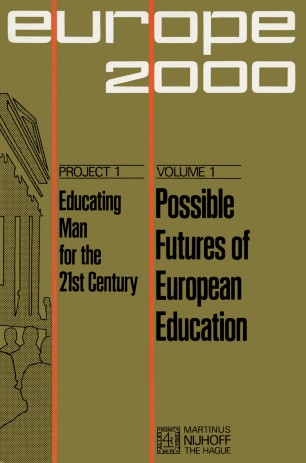 In "Plan Europe 2000," launched by the European Cultural Foundation, the first project is devoted to education. This project sets out to isolate the principal features, and to sketch the "image" of the educational system in the year 2000. It is not a matter of "forecasting," for that would imply that the modes of educating people in the next thirty years are predeter­ mined and subject to the operation of factors that must be respected like the laws of an inevitable evolution. We should be trying to unveil what is to come. Nor is the enterprise a project based on the options considered to be most desirable, which would imply that man has an entirely free will and is capable of dominating anything that might oppose that will. We should then be trying to "dictate" what we want to exist in the year 2000. It would be the act of a demiurge. The project is in fact a long-term prospective effort, which must take into consideration· - major constraints and unyielding tendencies, scarcely susceptible of significant change; - data and factors that can be more or less freely manipulated but not ignored or eradicated; - priorities dictated by the limitations of time and means; - the authors' freedom of action, subject to the above limitations, and in any event to the following one: they must not conflict with European aspirations, even the latent ones; they must not outrage mental atti­ tudes that can only be modified by persuasion.