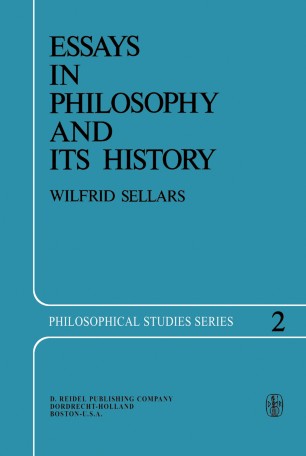 Essays in Philosophy and Its History

In pulling these essays together for inclusion in one volume I do not believe that I have done them violence. Since they originally appeared at different times and places they constitute a scattered object. Never­ theless, to the author's eye they have unities of theme and development which, if they fail to give them the true identity of the book, may (to adapt a metaphor from Hume) generate those smooth and easy transi­ tions of the imagination which arouse dispositions appropriate to sur­ veying such identical objects. For the juxtaposition of historical and systematic studies I make no apology. It has been suggested, with a friendly touch of malice, that if Science and Metaphysics consists, as its subtitle proclaims, of Variations on Kantian Themes, it would be no less accurate to sub-title my historical essays 'variations on Sellars ian themes'. But this is as it should be. Phi­ losophy is a continuing dialogue with one's contemporaries, living and dead, and if one fails to see oneself in one's respondent and one's re­ spondent in oneself, there is confrontation but no dialogue. The historian, as Collingwood points out, becomes Caesar's contemporary by learning to think Caesar's thoughts. And it is because Plato thought so many of our thoughts that he is our contemporary and companion.