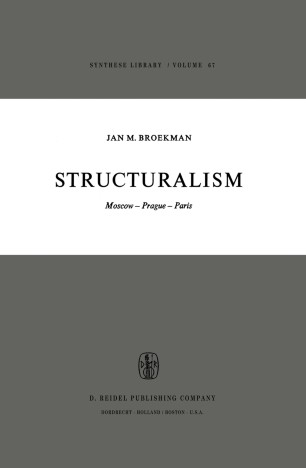 The use of the word 'structuralism', not only as a title for the present book but also as a valuable indication for outstanding philosophical and cultural developments of our century, may embarrass the English reader. The same might be the case regarding some of the philosophical thoughts developed in connexion with this structuralism. Emphasis is namely not on a set of technical operations using ideas and conceptions closely linked up with 'structural' or 'systematical' analyses, system and in formation theories, biology, psychology and even literary criticism. On the contrary, the concept of structuralism here defmitely refers to a holistic approach, not unlike existentialism or phenomenology. Many philosophical implications of this structuralism are however quite different from those contained in existential philosophies. The first difference applies to philosophy itself: no existential thinker will doubt or deny that the thoughts developed are genuine philoso­ phical thoughts. Structuralism however does not take that decision before­ hand, and thus no longer restricts itself to the traditionallaws and habits of philosophical reasoning. It presents itself on the one hand as a holistic attempt to interpret reality among lines of philosophical argumentation, bu t tries to do so without the decision that this argumentation leads to philoso­ phy. Structuralism therefore presents itself as a specific activity, a modus operandi in reality itself.