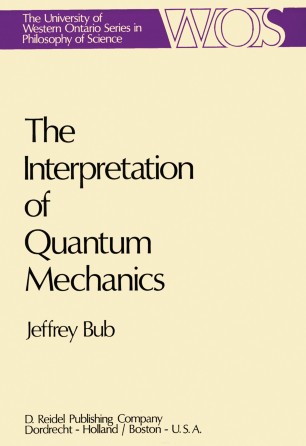 The Interpretation of Quantum Mechanics

Part of the The University of Western Ontario Series in Philosophy of Science book series (WONS, volume 3)

This book is a contribution to a problem in foundational studies, the problem of the interpretation of quantum mechanics, in the sense of the theoretical significance of the transition from classical to quantum mechanics. The obvious difference between classical and quantum mechanics is that quantum mechanics is statistical and classical mechanics isn't. Moreover, the statistical character of the quantum theory appears to be irreducible: unlike classical statistical mechanics, the probabilities are not generated by measures on a probability space, i. e. by distributions over atomic events or classical states. But how can a theory of mechanics be statistical and complete? Answers to this question which originate with the Copenhagen inter­ pretation of Bohr and Heisenberg appeal to the limited possibilities of measurement at the microlevel. To put it crudely: Those little electrons, protons, mesons, etc. , are so tiny, and our fingers so clumsy, that when­ ever we poke an elementary particle to see which way it will jump, we disturb the system radically - so radically, in fact, that a considerable amount of information derived from previous measurements is no longer applicable to the system. We might replace our fingers by finer probes, but the finest possible probes are the elementary particles them­ selves, and it is argued that the difficulty really arises for these.