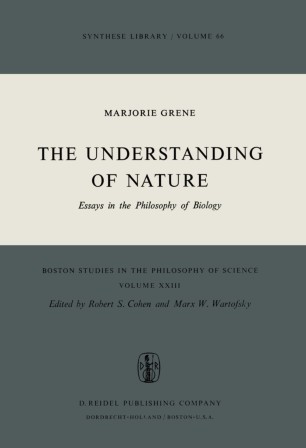 The Understanding of Nature

Essays in the Philosophy of Biology

Part of the Boston Studies in the Philosophy of Science book series (BSPS, volume 23)

No student or colleague of Marjorie Grene will miss her incisive presence in these papers on the study and nature of living nature, and we believe the new reader will quickly join the stimulating discussion and critique which Professor Grene steadily provokes. For years she has worked with equally sure knowledge in the classical domain of philosophy and in modern epistemological inquiry, equally philosopher of science and metaphysician. Moreover, she has the deeply sensible notion that she should be a critically intelligent learner as much as an imaginatively original thinker, and as a result she has brought insightful expository readings of other philosophers and scientists to her own work. We were most fortunate that Marjorie Grene was willing to spend a full semester of a recent leave here in Boston, and we have on other occasions sought her participation in our colloquia and elsewhere. Now we have the pleasure of including among the Boston Studies in the Philosophy of Science this generous selection from Grene's philosophical inquiries into the understanding of the natural world, and of the men and women in it. Boston University Center for the R. S. COHEN Philosophy and History of Science M. W. W ARTOFSKY April 1974 PREFACE This collection spans - spottily - years from 1946 ('On Some Distinctions between Men and Brutes') to 1974 ('On the Nature of Natural Necessity').