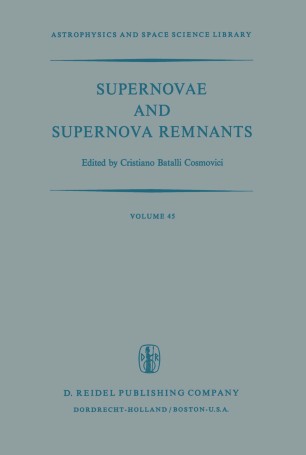 Proceedings of the International Conference on Supernovae Held in Lecce, Italy, May 7–11, 1973

This conference is a tribute to those astronomers who pioneered the investigation of this subject such a short time ago and who carried it through to its present state. (H. Arp, Concluding Remarks of the Conference) A previous conference, covering mainly the observational aspects of Supernovae, was held at the Haute Provence Observatory in September 1963. In the following ten years this field of research has considerably increased; it seemed, therefore, the right time to organize an international conference on Supernovae taking into account that in the meantime important discoveries, such as the Pulsars, had been made, and new techniques of observation were available. This book contains the proceedings of this conference held at Porto Cesareo (Lecce), Italy, during the period May 7 through 11, 1973. About one hundred participants from eighteen countries attended the conference. It was also the first attempt to hold an international conference in the Salento, the southernmost region of Apulia, in whose capital, Lecce, the newly founded Faculty of Sciences of the University of Lecce is located. The program of the conference included the results and techniques of Supernova surveys, photometric and spectral studies, statistics of Supernovae, Supernova Rem­ nants, and finally, theories on Supernovae and Supernova Remnants.