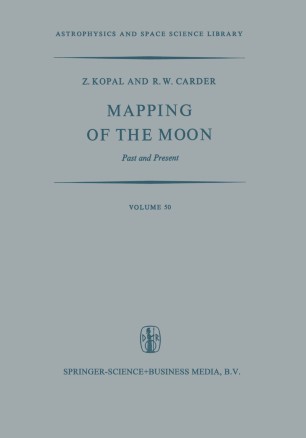 Mapping of the Moon

The aim of the present book has been to provide an outline - the first of its kin- of the history of the human efforts to map the topography of the surface of our satellite, from the days of pre-telescopic astronomy up to the present. These efforts commenced modestly at the time when the unaided eye was still the only tool at the disposal of men interested in the face of our satellite; and were con­ tinued since for more than three centuries by a small band of devoted friends of the Moon in several countries. Many of these were amateur astronomers, and almost all were amateur cartographers; though some highly skilled in their art. The reader interested in the history oflunar mapping between 1600 and 1960 will find its outline in the first chapter of this book; and can follow the way in which the leadership in the mapping of the Moon, the cradle of which stood in Italy, passed successively to France, Germany, and eventually to the United States. All efforts described in this chapter were wholly superseded by subsequent devel­ opments since 1960, largely motivated by logistic needs of a grand effort which cul­ minated with repeated manned landings on the Moon between 1969-1972- a feat which will remain for ever one of the glories of our century.