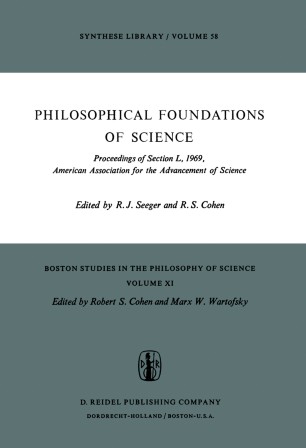 Proceedings of Section L, 1969, American Association for the Advancement of Science

Part of the Boston Studies in the Philosophy of Science book series (BSPS, volume 11)

At the 1969 annual meeting of the American Association for the Ad­ vancement ofScience, held in Boston on December 27-29, a sequence of symposia on the philosophical foundations of science was organized jointly by Section L of the Association and the Boston Colloquium for the Philosophy of Science. Section L is devoted to the history, philos­ ophy, logic and sociology of science, with broad connotations extended both to 'science' and to 'philosophy'. With collaboration generously extended by other and more specialized Sections of the AAAS, the Section L program took an unusually rich range of topics, and indeed the audiences were large, and the discussions lively. This book, regrettably delayed in publication, contains the major papers from those symposia of 1969. In addition, it contains the distin­ guished George Sarton Memorial Lecture of that meeting, 'Boltzmann, Monocycles and Mechanical Explanation' by Martin J. Klein. Some additions and omissions should be noted: In Part 1, dedicated to the 450th anniversary of the birth of Leonardo da Vinci, we have been una bie to include a contrihution by Elmer Belt who was prevented by storms from participating. In Part II, on physics and the explanation of life, we were unable to persuade Isaac Asimov to overcome his modesty about the historical remarks he made under the title 'Arrhenius Revisited'.