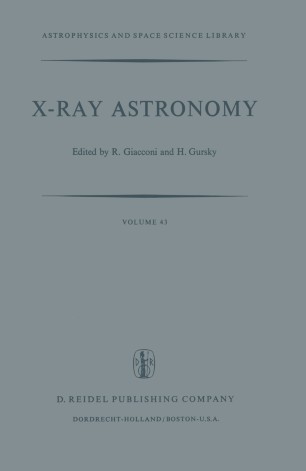 It was about fourteen years ago that some of us became intrigued with the idea of searching the sky for X-ray and gamma-ray sources other than the Sun, the only celestial emitter of high-energy photons known at that time. It was, of course, clear that an effort in this direction would not have been successful unless there occurred, somewhere in space, processes capable of producing high-energy photons much more efficiently than the processes responsible for the radiative emission of the Sun or of ordinary stars. The possible existence of such processes became the subject of much study and discussion. As an important part of this activity, I wish to recall a one-day conference on X-ray astronomy held at the Smithsonian Astrophysical Observatory in 1960. The theoretical predictions did not provide much encouragement. While several 'unusual' celestial objects were pin-pointed as possible, or even likely, sources of X-rays, it did not look as if any of them would be strong enough to be observable with instru­ mentation not too far beyond the state of the art. Fortunately, we did not allow our­ selves to be dissuaded. As far as I am personally concerned, I must admit that my main motivation for pressing forward was a deep-seated faith in the boundless re­ sourcefulness of nature, which so often leaves the most daring imagination of man far behind.