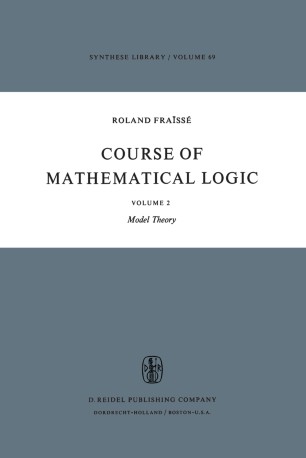 This book is addressed primarily to researchers specializing in mathemat­ ical logic. It may also be of interest to students completing a Masters Degree in mathematics and desiring to embark on research in logic, as well as to teachers at universities and high schools, mathematicians in general, or philosophers wishing to gain a more rigorous conception of deductive reasoning. The material stems from lectures read from 1962 to 1968 at the Faculte des Sciences de Paris and since 1969 at the Universities of Provence and Paris-VI. The only prerequisites demanded of the reader are elementary combinatorial theory and set theory. We lay emphasis on the semantic aspect of logic rather than on syntax; in other words, we are concerned with the connection between formulas and the multirelations, or models, which satisfy them. In this context considerable importance attaches to the theory of relations, which yields a novel approach and algebraization of many concepts of logic. The present two-volume edition considerably widens the scope of the original [French] one-volume edition (1967: Relation, Formule logique, Compacite, Completude). The new Volume 1 (1971: Relation et Formule logique) reproduces the old Chapters 1, 2, 3, 4, 5 and 8, redivided as follows: Word, formula (Chapter 1), Connection (Chapter 2), Relation, operator (Chapter 3), Free formula (Chapter 4), Logicalformula,denumer­ able-model theorem (L6wenheim-Skolem) (Chapter 5), Completeness theorem (G6del-Herbrand) and Interpolation theorem (Craig-Lyndon) (Chapter 6), Interpretability of relations (Chapter 7).