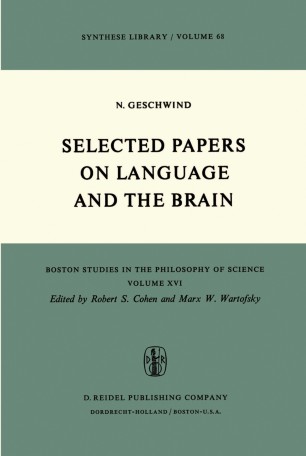 Selected Papers on Language and the Brain

Part of the Boston Studies in the Philosophy of Science book series (BSPS, volume 16)

Philosophers of science work not only with the methods of the sciences but with their contents as well. Substantive issues concerning the relation between mind and matter, between the material basis and the functions of cognition, have been central within the entire history of philosophy. We recall such philosophers as Aristotle, Descartes, the early Kant, Ernst Mach, and the early William James as directly inquiring of the organs and structures of thinking. Science and its philosophical self-criticism are especially and deeply united in the effort to understand the biological brain and human behavior, and so it requires no apology to include this collection of clinical studies among Boston Studies in the Philosophy of Science. The work of Dr. Norman Geschwind, well represented in this selection, explores the relation between structure and function, between the anatomy of the brain and the 'higher' behavior of men and women. As a clinical neurologist, Geschwind was led to these studies particularly by his in­ terest in those pathologies which have to do with human perception and language. His research into the anatomical substrates of specific dis­ orders-and strikingly the aphasias -present a fascinating and provocative examination of fundamental questions which will concern not neurologists alone but also psychologists, physicians, linguists, speech pathologists, educators, anthropologists, historians of medicine, and philosophers, among others, namely all those interested in the characteristic modes of human activity, in speech, in perception, and in the learning process generally.