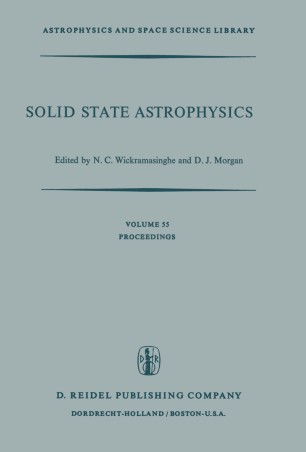 Proceedings of a Symposium Held at the University College, Cardiff, Wales, 9–12 July 1974

Over the past decade the study of the formation and properties of interstellar grains has assumed a growing importance, going much beyond what might have been guessed only a few years ago. It has come to be understood that grains playa role in processes other than the simple absorption and scattering of starlight, which was all that the astronomers of a generation aga considered to be their relevance. Grains indeed playa critical role in controlling the temperature, composition, and states of aggregation of the whole interstellar medium. Among the still mysterious problems is the origin of the vast clouds of obscuring material that is observed in radiogalaxies like NGC 5128 and M 82, which may weIl be associated with the explosions of very massive objects. It is safe to say that from this growing field of study much still remains to be dis­ covered. The topics discussed in this volume will make clear to the reader the range and versatility of the subjects. F. HOYLE FOREWORD by THE PRINCIPAL The Symposium on Solid State Astrophysics held in July 1974 brought to University College Cardiff a large and very distinguished gathering of astronomers. It was the first time that such a collection of scholars, absorbed with the problem of the systems of outer space, had collected together in Wales, and so provided a splendid spring­ board for the researches of the newly founded group of astronomers in the Department of Applied Mathematics and Astronomy at University College.