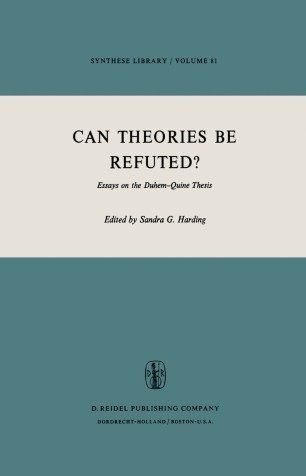 Can Theories be Refuted?

Essays on the Duhem-Quine Thesis

According to a view assumed by many scientists and philosophers of science and standardly found in science textbooks, it is controlled ex­ perience which provides the basis for distinguishing between acceptable and unacceptable theories in science: acceptable theories are those which can pass empirical tests. It has often been thought that a certain sort of test is particularly significant: 'crucial experiments' provide supporting empiri­ cal evidence for one theory while providing conclusive evidence against another. However, in 1906 Pierre Duhem argued that the falsification of a theory is necessarily ambiguous and therefore that there are no crucial experiments; one can never be sure that it is a given theory rather than auxiliary or background hypotheses which experiment has falsified. w. V. Quine has concurred in this judgment, arguing that "our statements about the external world face the tribunal of sense experience not indi­ vidually but only as a corporate body". Some philosophers have thought that the Duhem-Quine thesis gra­ tuitously raises perplexities. Others see it as doubly significant; these philosophers think that it provides a base for criticism of the foundational view of knowledge which has dominated much of western thought since Descartes, and they think that it opens the door to a new and fruitful way to conceive of scientific progress in particular and of the nature and growth of knowledge in general.