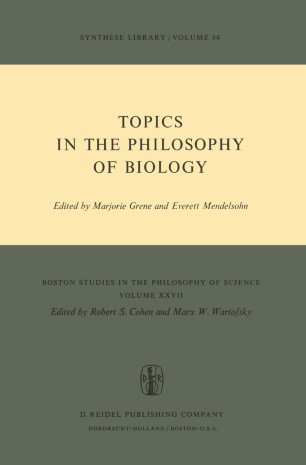 Topics in the Philosophy of Biology

Part of the Boston Studies in the Philosophy of Science book series (BSPS, volume 27)

The philosophy of biology should move to the center of the philosophy of science - a place it has not been accorded since the time of Mach. Physics was the paradigm of science, and its shadow falls across con­ temporary philosophy of biology as well, in a variety of contexts: reduction, organization and system, biochemical mechanism, and the models of law and explanation which derive from the Duhem-Popper­ Hempel tradition. This volume, we think, offers ample evidence of how good contempo­ rary work in the philosophical understanding of biology has become. Marjorie Grene and Everett Mendelsohn aptly combine a deep philo­ sophical appreciation of conceptual issues in biology with an historical understanding of the radical changes in the science of biology since the 19th century. In this book, they present essays which probe such historical and methodological questions as reducibility, levels of organization, function and teleology, and the range of issues emerging from evolution­ ary theory and the species problem. In conjunction with Professor Grene's collection of essays on the philosophy of biology, The Under­ standing of Nature (Boston Studies in the Philosophy of Science, Vol. XXIII) and the occasional essays on these topics which we have published in other volumes (listed below), this volume contributes to bringing biology to the center of philosophical attention. Everett Mendelsohn, 'Explanation in Nineteenth Century Biology' (Boston Studies, Vol. II, 1965). David Hawkins, 'Taxonomy and Information', (Boston Studies, Vol. III, 1967).