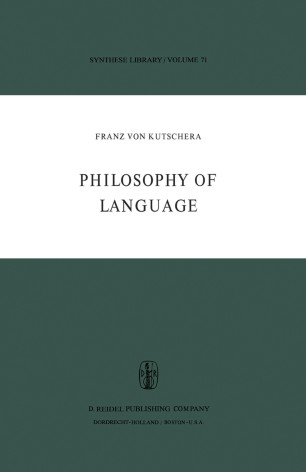 This book has arisen out of lectures I gave in recent years at the Uni­ versities of Munich and Regensburg, and it is intended to serve as a textbook for courses in the Philosophy of Language. In my lectures I was able to presuppose that the students had taken an introductory course in logic. Some knowledge of logic will also be helpful in studying this book - as it is almost everywhere else in philosophy -, especially in Section 3. 2, but it is no prerequisite. I would like to give my sincere thanks to Prof. Terrell for his excellent translation of the book, which is based on the second, revised and en­ larged German edition. Regensburg, May 1975 FRANZ VON KUTSCHERA INTRODUCTION Language has become one of philosophy's most important and pressing themes during this century. This preoccupation with language has its ori­ gins in the most diverse areas of philosophical inquiry.